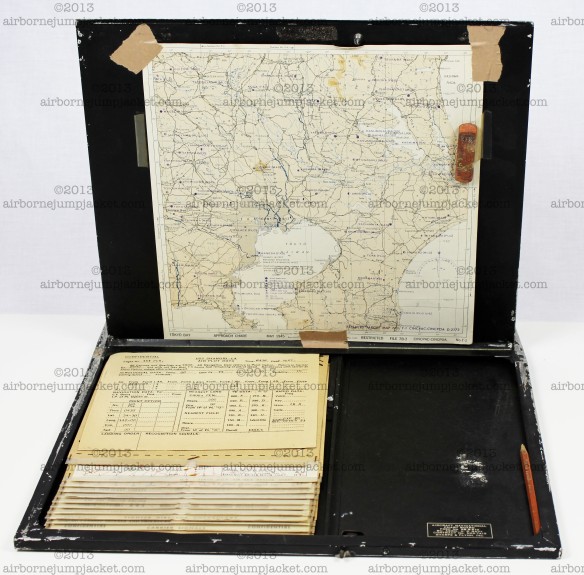 This plotting board belonged to a World War Two Navy pilot who was a member of VF-85.  He was with VF-85 while it was serving on the carrier USS Shangri-La from November 1944 to September 1945.  Fighting Squadron Eighty Five flew F4U-1C Corsairs while fighting the Japanese during the Okinawa campaign and saw heavy combat.  After Okinawa, they flew missions over Japan until the end of the war.

Plotting boards were used by naval aviators to hold their maps, checklists, and other documents they would need for their missions.  They were designed so that they could be removed from the aircraft and taken into the ready room by the pilot for their mission briefings.  The top of the board was a clear plastic that allowed a pilot to take notes in an erasable pencil and to see the map underneath it.

This plotting board is part of a larger grouping and belonged to a naval aviator who was nicknamed Tiger by his fellow pilots.  Tiger managed to survive the loss of three Corsairs he was flying.  The first occurred during training when a fellow pilot ran into his plane and tore off part of his tail.

The second occurred while Tiger was making an attack against an airfield on Okinawa.  He was hit by anti-aircraft fire and bailed out over the water.  He was rescued by a PBM that landed off shore and picked him up.

The third time occurred when he was part of a strike group that attacked Japanese airfields on Kyushu.  His strike group engaged in heavy aerial combat with Japanese fighters and after the fight, he ran out of gas on the way back to his carrier.  He ditched in the water next to a US destroyer and was picked up.

His plotting board is a real time capsule.  The plotting board still contains the maps and documents from his last wartime flight on September 2, 1945.  This was the date of the formal surrender signing in Japan and his unit was one of the air units that flew in the huge fly overs to commemorate the signing of the surrender by the Japanese.  The next day, September 3, 1945, his unit VF-85 was relieved and transferred to a another ship to be sent home.