Here is Lee Marvin in his USMC uniform, pictured in the 1943 produced yearbook for the members of the 24th Marine Regiment, 4th Marine Division.  Most people know Lee Marvin as an actor famous for his roles in movies like The Dirty Dozen and The Big Red One.   Before he became an actor, he enlisted in the US Marines in 1942 and served with the 4th Marine Division until he was severely wounded on Saipan on June 18, 1944.

He spent the next 13 months in hospital recuperating from this wound which damaged a sciatic nerve before being discharged in 1945.  His wound was severe enough for him to receive disability payments from the military after discharge.

I have the complete set of all of these 4th Marine Division yearbooks from 1943.  There are separate books for the three infantry regiments (23rd Marines, 24th Marines, 25th Marines), the artillery regiment (14th Marines), the engineer regiment (20th Marines), and also books that have special troops like the tank battalion, etc.  They are great research tools and they do turn up occasionally on eBay.

Unfortunately, they never did updated volumes of the yearbook later or at the end of the war, so if a Marine was a replacement to the 4th Marine Division after these were printed in 1943, he will not be pictured in a yearbook. 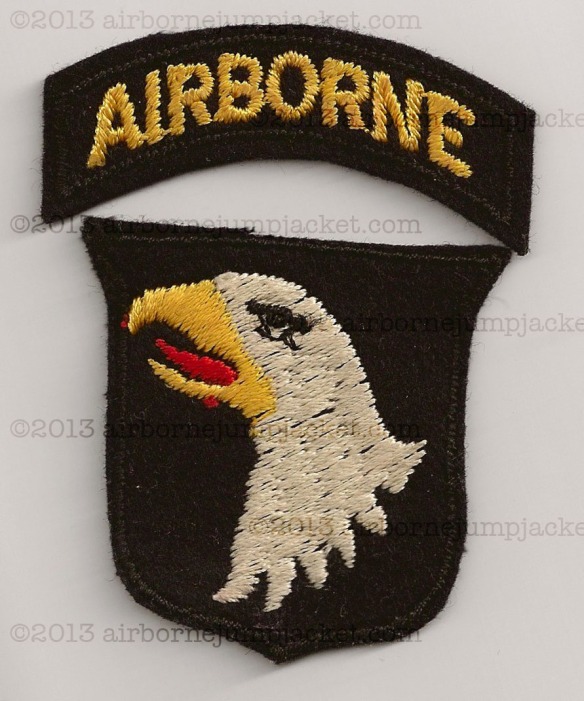 He had contacted my friend because he was looking for a couple of medals he was awarded, but never issued, for a shadow box display he was doing.  My friend was able to provide him with those medals.  The veteran brought both of these patches with them to the meeting and sold them to my picker, because he had enough patches for his display.  He had obtained them during WWII while he was stationed in England.

I was very happy to purchase them a couple of days ago from my picker.  I love to get items directly from the Veteran because you get all of the history to go along with the item.  As an added bonus, this 101st veteran also gave my friend a photocopy of his discharge to go along with the patches.  Also, like most collectors, I like different variations of items.

Even after the Marines generally abandoned wearing camouflage uniforms in favor of the plain green hbt P41 uniforms later in World War Two, they continued to wear these camouflage helmet covers.  It became, in my opinion, one of the iconic symbols of the WW2 Marine.